My former spanish teacher drives on rocketfuel and runs triathlons to chill out a bit. Shes a real brilliant valenciano chica and a schoolteacher by profession. The other day she hit me up all jolly inviting me to come join her for a fiesta – as she was finally back in Javea for the night. I said: NO, NO, NO and NO again…and it wasnt just spite, it was culture.

Now a couple of years ago, when she was still my teacher, she invited me to this end-of-schoolyear fiesta. I wasnt too keen to go to a school fiesta but she convinced me by emphasising that the entire town comes for it, its very informal and theres a bar serving beer. So I thought, ah well allright if its a community thing I can nip over, have a drink or two and sneak off – no biggie.

Well of course, the premise was completely false. There were kids and their proud parents there. Noone else. Except me. There was a small bar and you could buy a beer – if you specifically asked the 6yo toddler for it. I had a coffee. Whilst it all felt a bit strange being the seemingly only one there without kids, I thought I would sneak down to the back of the big square full of chairs and just sit around with my coffee for a while. But. Not so fast!

– Oh hey Morten, great to see you. So which one is yours upthere? (Some jolly english mum I vaguely knew had caught me out.)
– Uhm … none of them, I dont have kids
– So…why…oh anyway it was great seeing you. (And she left in a hurry.) 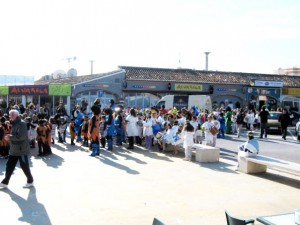 Hmmm. That was a bit akward and I quickly fought my way down to the back

– Heya. Didnt know you had kids. You should bring them over sometime. (Before I had found a seat I was caught out again – this time by a guy I´d bought some stuff off downtown)
– Hmmm well, I dont really, as such ….have kids … (I stuttered.)
– No? (And he just kinda looked at me for a bit, did the classic english shrug and left.)

I felt rather like the odd creep out by now. The whole crowd of proud parents were almost definitely staring and whispering about the dubious guy who had come round to look at kids. Just look at kids. No other reason for him to be here. Creep. By now I really wished I´d bought a cold drink.

I finished my coffee as quickly as possible. My teacher was running around backstage herding kids onto the stage and looking jolly. Perfect. I was gonna do the invisible get-away maneuvre. I went behind the entire crowd, made it back past the bar and almost up to the stage that had the exit next to it, when a loud voice penetrated the evening sky over Javea:

– Morteeeen, you caaaaaaaaame. (My teacher, great, caught out badly this time.)
– Yes, and it was very impressive all of it.
– What did you like the best???
– Uhm ehm the eh singing was cool, they danced too and stuff, very impressive. I really gotta run though Im afraid, but it was great!
– No, no, no, no … its just started and in 3 acts time is the big one I choreographed. Im so happy I found you. I need you to film it for me, I have a videocamera here.
– Ah no, I mean it sounds brilliant, but I really dont wanna film it.
– Sii siii, its not a problem, the camera is insured.
– Yes its not that, I would just like rather not stand here filming.
– Oh dont be like that you silly danish person, vamos vamos, it doesnt need to be professional I want it for class after to show the kids
– Yeah thats a great idea, but I really really dont wanna film kids. You know, I dont have kids and such….
– Sii sii, I know you dont have kids, we dont either, but thats irrelant isnt it, here is the camera, you should go film from right under the stage, its much better
– Ehm no you see, I dont wanna stand right in front of everyone and I absolutely dont wanna stand there filming. Cant you get like some parent to do it?
– But whyyyyy? You must film this, its very important and the parents are all busy watching their kids, you know
– Yeah I know…thats exactly it. And I dont want them thinking some bloke is really interested in their kids and running around filming them…see?
– No no, of course youre interested. They are all doing very well, siiii. You can explain to me in class on monday. Here, have the camera. 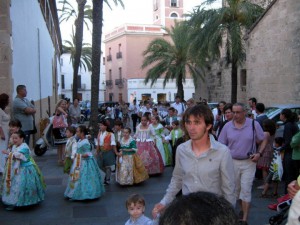 Sooo. I stood there with the videocamera. 3 acts to go and a kids display to film. Surrounded by proud parents still glaring at me with suspicion or so it felt. I looked around a bit. Saw an estate agent I knew having a laugh with his wife and numerous kids, some girl I only knew from facebook was clapping her hands frantically at some kind of toddlers magic tricks on stage, my insurance broker was further back filming the epic event … I quit the pointless excercise realising I was entirely surrounded, crawled out of the venue and into the first bar I could find for a drink. Sadly on the following monday, I had to admit I couldnt make the camera work so there was no footage…of kids. I was teased alot about it, I felt it was a tiny price to pay.

Now I totally support peoples rights to have kids. As long as theyre of course banned from airplanes, restaurants and supermarkets theyre no big bother. I particularly dont mind spanish kids, compared to other kinds of kids they seem incredibly well behaved and I find it rather charming that parents drag them around town till early hours in the morning, occationally its even possible to sit at a table next to such kids in a restaurant without them spitting their food at my plate, being breastfed or having a nice little poo in the pants at their table. I like – or can at least tolerate – that. However it occurs to me that theres a connection between the behaviour of spanish kids, the attitude the spanish seemingly have towards them – and the contrasting akwardness of us northerness.

For example… In a local chinese bazaar they had dressed up a childs mannequin in a rather sexy womans tshirt. Obviously a mistake given the shirt – despite its sexiness and its rude writings – was vastly too big for the mannequin. A group of local british expats got outraged. The group filed a formal complaint to the local council, wrote angry letters to local expat newspapers and apparently started plotting a boycot. I was sitting in a bar largely nextdoor chatting to the spanish owner who said: Siii, they used the wrong doll, maybe them british are afraid they will buy it and put it on their kid instead of their wife too??? jejejeje, I think if somebody had gone in and told the chinese, it would have been put on another doll in 5minutes. Now we can wait for 3months for the politicians to reply.

Nearby I went to a party at a small bar full of expats with a mate. At one point my mate went to the toilet and this little english girl was having a laugh blocking the way. He asked her to move away. She giggled and refused, spreading her arms to block entry. He gently put his arm on her shoulder and started walking past. She promptly turned towards her dad standing nearby and yelled: DADDYYYY That man touched me!!! Silence. Staring. Tension. 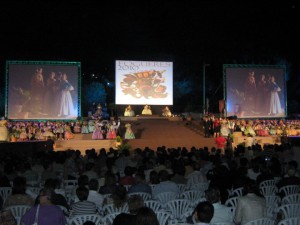 Today I went and saw the annual bull football event. Basically people playing soccer whilst chased by bulls. A guy was gotten pretty bad by a bull and whilst I was walking home the red cross was patching him up. I noticed the next event this afternoon being “Kids and bulls”. I dont even wanna know how that plays out. On thursday comes carrefocs, another spanish evening of absolute madness as they jump over big fires in the street and get chased through narrow alleyways with fireworks – all perfectly acceptable events to take your toddlers to of course, if theyre too small to jump through fire themselves – pick them up and jump with them. Imagine for a second those events happening in downtown Liverpool, Copenhagen or Hamburg … and the outcry that would follow.

Where am I going with this? Us northerners are largely crippled, akward and weird when it comes to kids, whilst spanish families seem perfectly capable of letting their toddlers roam round town playing on their own, go to the beach or have them dancing about at fiestas, take huge gangs of them to restaurants for family dinners without causing riots … and however much I tried explaining to my teacher later, why I felt uncomfortable filming kids at the school show, she could never grasp the problem. Because, it would seem, it doesnt exist in her world. Why? Is it a lack of actual problems, a lack of making kids centre of the universe? I have no idea, but it surely seems the outcome is alot more healthy and natural.

But no, I didnt go to this years school fiesta. Once corrupted it cant be undone.